The rain and hail will not deter us! There is no such thing as bad weather…

It was an overcast day and Storm Henry was looming…perfect weather for teaching bush craft. The mini troopers gathered together under a giant parachute and listened intently as we told them what we had in store for them that day before splitting them into two groups.

My group were going to learn how to build a shelter. As we walked out to the tree line, the heavens opened and a downpour of rain and hail hit us. This added to the excitement of the task ahead as the reality of building a shelter that would protect us from the weather sunk in.

We looked around and considered what we could use to make a shelter. What would be a good spot? Was it level and free from low hanging branches? What surface should we be looking for? How we were we going to ensure we did not get wet?

After finding flat ground and checking above for an area free of loose branches we chose our spot and, working in pairs, we erected bashas. After a debrief, we discussed ways we could use only the materials around us such as branches, grass and ferns to create a shelter. There were many creative answers! I asked them to look around and to tell me what they could see. With excitement they spotted some shelters we had made earlier. They rushed off to explore them. We then regrouped, talked about how the structure was made and how we used the grass and ferns to cover the frame, which was made of branches. After a demonstration on how to build the frame, the mini troopers went off to collect their own branches and began to make their own versions. I always love to hear their discussions as they start building, what branches, what methods to use. So much creativity went into this morning’s activity and the mini troopers worked hard together, solving problems as they occurred. 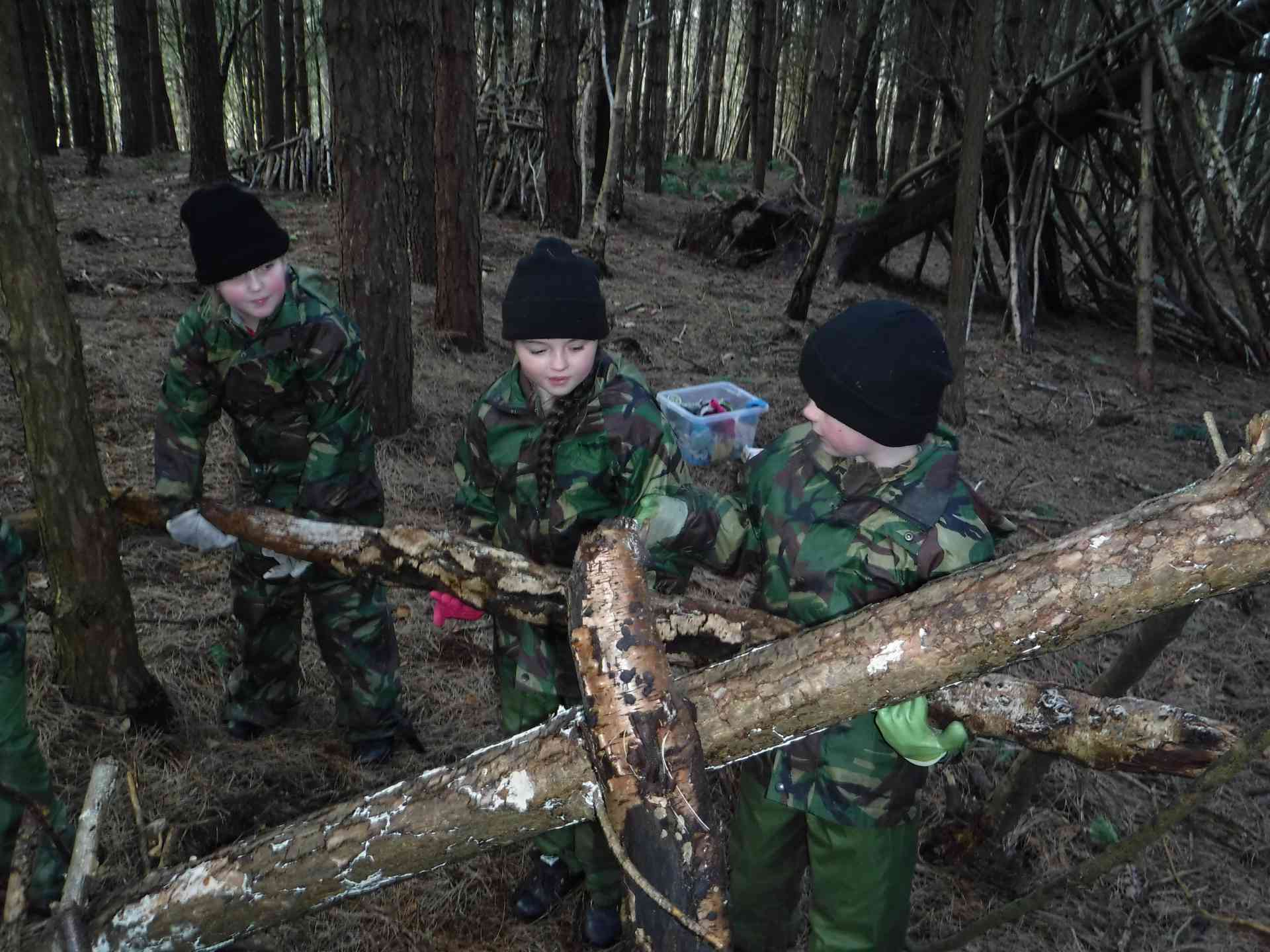 KA said “I picked up 3 branches before I found the right size to use as a peg and then it snapped and I spent ages finding another one, everything was wet but I kept looking and eventually got a good one.”

The teacher accompanying the mini troopers said, “It was great to see DM get so involved, sometimes he can be hesitant to try new things.”

After shelter building my group and I turned our attention fire lighting. There are many methods to start a fire; today we were focusing on the flint and steel method. After listening to our lesson and watching a demonstration of how to use the flint and steel, it was the mini troopers turn to have a go. In a friendly competition they all sat on the ground, placing flint in one pocket and the steel in the other – the task was to light the ball of cotton wool in front of them. They clearly enjoyed this; their faces were full of concentration and everyone succeeded.

JT said, “I struggled to get the spark, but then Sgt Bussell showed me again and with more pressure to the flint and steel I eventually lit it.”

HB said, “I was the first to light mine. I was the winner.”

In the afternoon, we split the mini troopers into two teams and set them off on a challenge, asking them to put into practice all the skills they had learnt from the morning’s lessons. We tasked them with building a man-made shelter and making a fire. They got into it right away. A leader for each team was chosen (by us), who then allocated building the fire to some of their team whilst the rest built the shelter. Everyone had a part to play.

As instructors observing their behaviour, we felt the mini troopers had really listened in the lessons as they worked tirelessly to be the first to boil water on the fire they had made and sit in the shelter they worked so hard on, before enjoying a rewarding hot chocolate. There was a sense of pride from all the mini troopers as they took ownership of their hard work.

For this task, we had deliberately appointed the quietest members of the group to be the leaders. They really stepped up to the role, tasking their fellow team members to specific jobs – it was clear both leaders wanted their team to win the task. Through all the rain and hail everyone showed real grit and determination as they pushed through to make their shelter the BEST one. 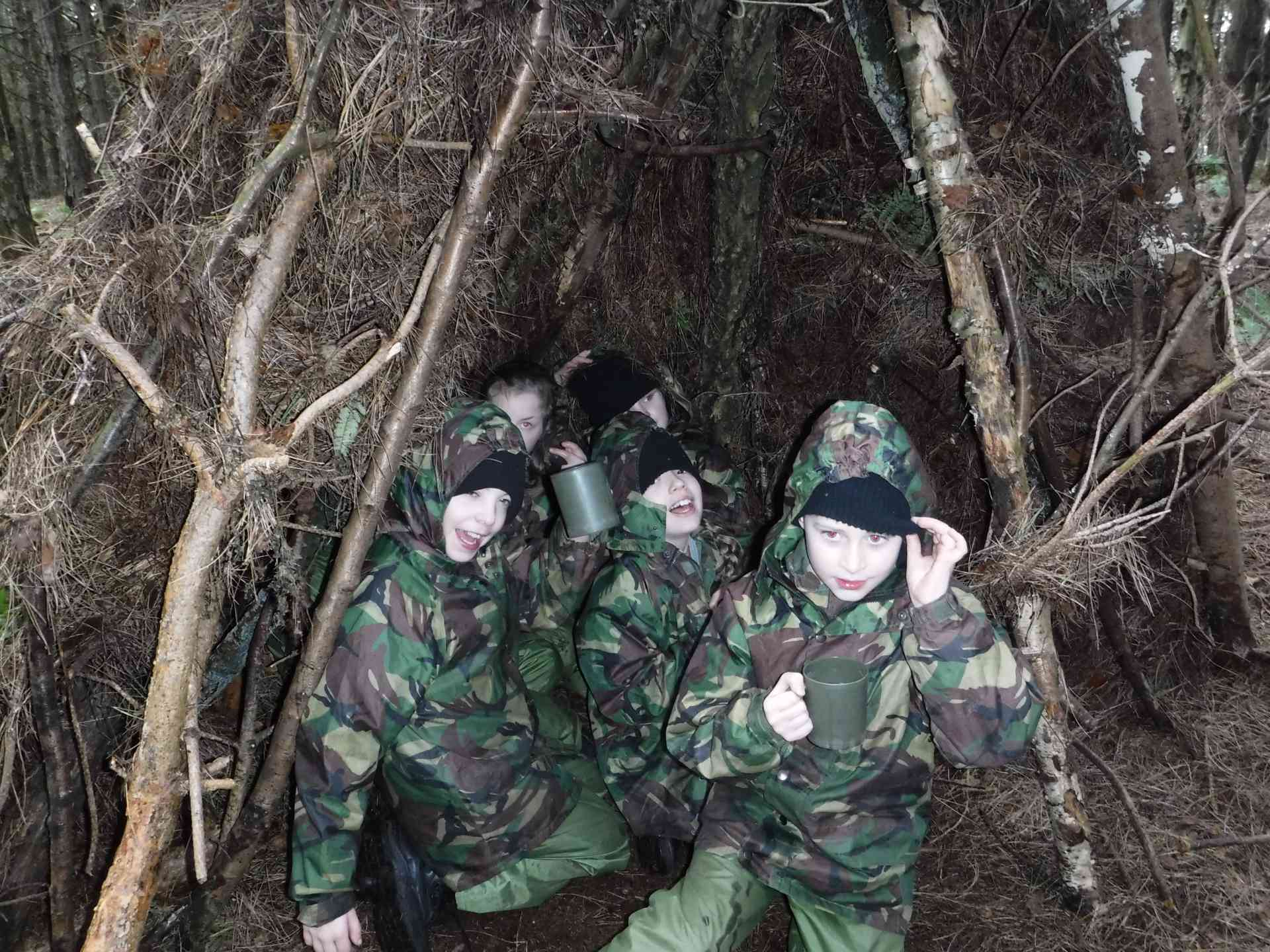 The teacher admitted, “I was a little nervous when you picked KG and CF as leaders, I don’t think I’ve ever heard them speak out. So to listen to them shout and give orders was a real eye-opener. HB particularly got stuck in and it was nice to see her focus her energy into something she was passionate about.”

Next week the mini troopers will be rewarded with adventure training as they reach the halfway point of their course.

I look forward to writing about our exploits. If you would like to read previous week’s blogs, please click here

If you would like more information on how our programmes support young people, please call us now 0845 548 5070 or click here