Staying ahead of the game

We have all been there with our children. Asking “How was school today?” “What did you learn?” Almost always with a grunt or a shrug of the shoulder or “I can’t remember”, so I thought why not pre-empt that and share with you what your son/ daughter has done today, so you don’t need to ask but instead ask them to show you.

Today was no ordinary day in the classroom. When our mini troopers turned up for their first aid session they walked into a room to be faced by a rather dramatic (staged) incident. There lying on the floor was an unconscious ‘casualty’ (played by their teacher). The mini troopers watched in amazement as we carried out a lifesaving scenario. They looked on as we treated the ‘casualty’ who was lying on the floor after we believed she was knocked unconscious from falling off her bike. Now we had their attention, we were able to introduce them to the Primary Survey (DRS ABC) and showed them how to place someone in the recovery position in a basic lifesaving lesson. Then, in pairs, the mini troopers took it in turns to pretend to be a casualty, carry out the DRS ABC steps looking out for any DANGER, checking to see if there is a RESPONSE, SHOUTING for help, checking their casualty’s AIRWAY is clear, are they BREATHING? Do they need CPR? Before placing their partner into the recovery position. 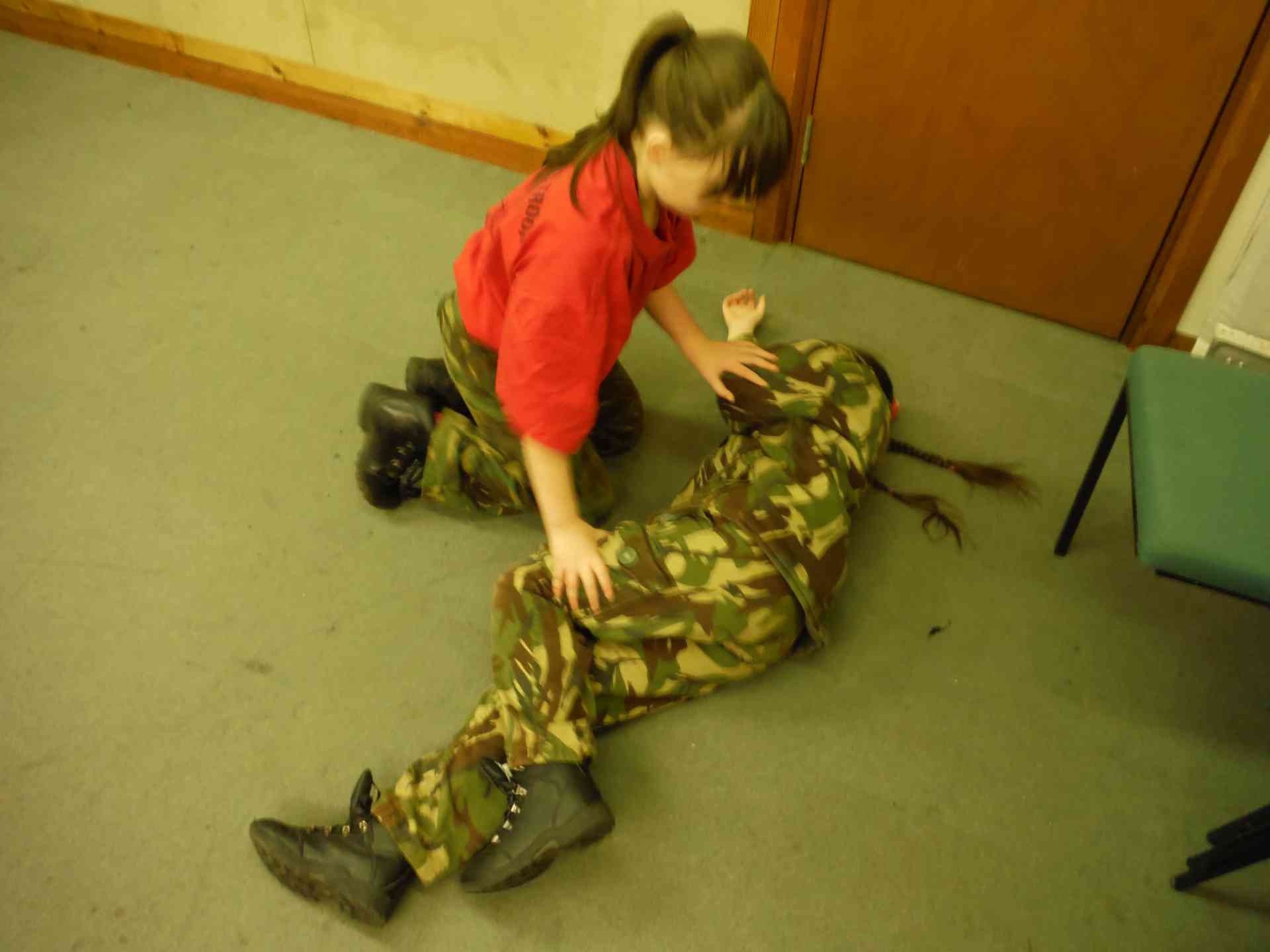 All mini troopers have been given a Challenger Troop recovery position handout of a step-by-step guide. This is something you can do as a family. Practice makes perfect. It is good to keep refreshing your first aid skills, as none of us know when it might be needed in a real-life situation.

KA said, “When I saw Miss on the floor, I was shocked and I felt a little scared, I didn’t know what was wrong with her. I’m glad that you were there to help and that now I know what to do.”

Throughout the 12-week course we will be introducing different first aid skills such as applying bandages, improvised stretcher building, resuscitation, treating minor burns, bleeds and more. At the end of the 12-week course, your mini trooper will have completed part of a St John Ambulance Young Life Saver Award.

My favourite pastime as a child was when I was out in the open, running and jumping around freely with my friends, cycling the length of the street, feeling that I was on a constant adventure. I was free, in a world of exploring and having fun!! Now I am older, I realise how important those carefree adventures were. While I was smiling and playing, I was actually developing stronger bones and muscles as well as refining my motor skills, perfecting my co-ordination, self-confidence and my ability to socialise.

As part of the Challenger Troop core programme, we assess your mini troopers’ fitness level in a two-part military-style fitness assessment. For the first part, the mini troopers are paired-off and carry out a 2 minute personal best in sit ups and press ups before undertaking the bleep test, which is a test of cardiovascular endurance involving jogging between two fixed points before the bleep. The interval between bleeps gets shorter encouraging the participants to run progressively faster. This is a challenge for many of our candidates and it takes a lot of self-discipline, determination and grit to dig deep and complete this to their absolute BEST EFFORT. 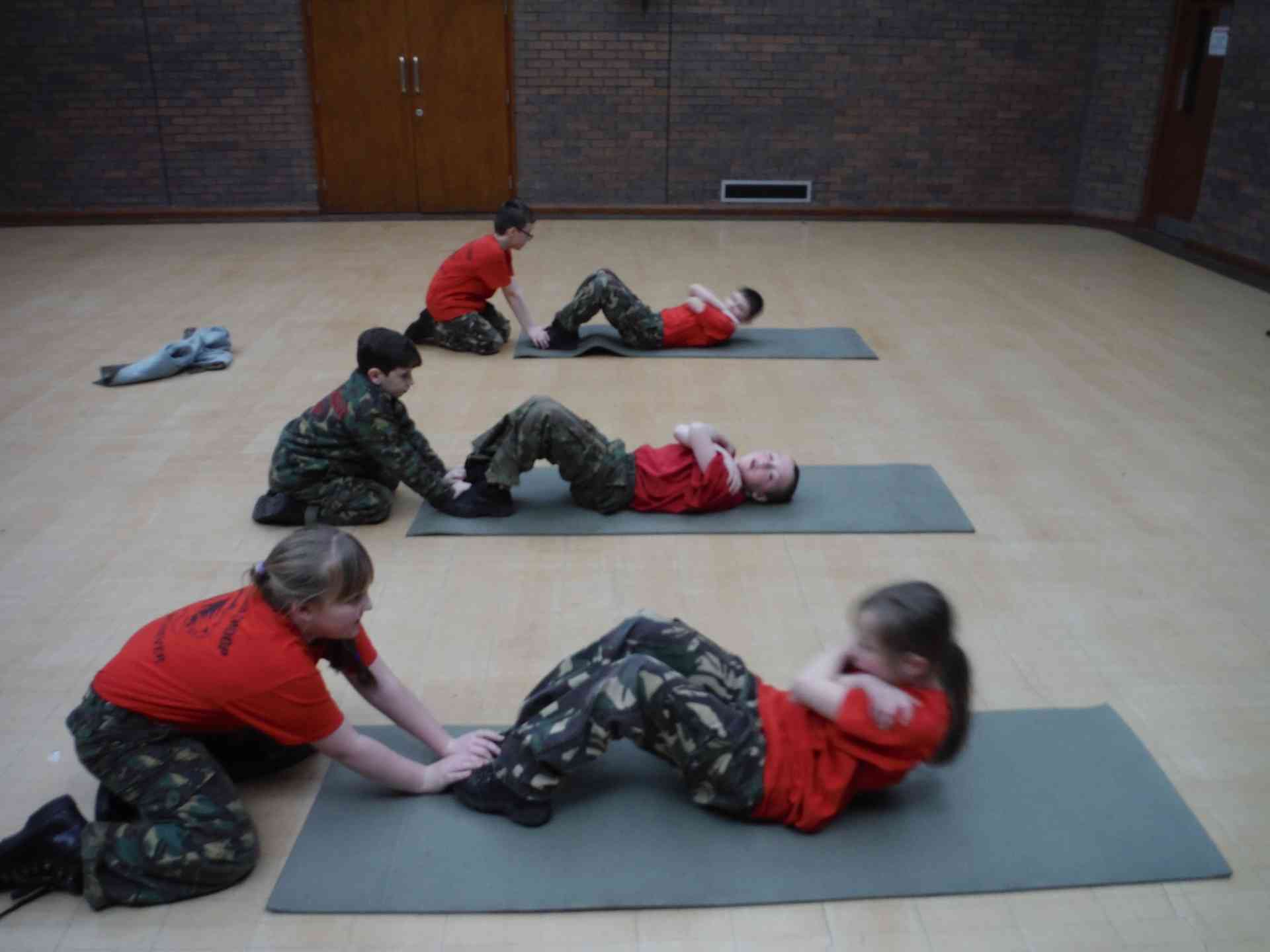 When taking part in this fitness assessment, we note down your child’s scores. Their challenge is to improve this score and aim to reach the 300 Club. The more sit ups and press-ups your child does, and the higher the level they attain on the bleep test, will determine entry into the Challenger Troop 300 Club, when they will be awarded a limited edition 300 Club T-shirt at the awards ceremony in celebration of their achievements.

The teacher accompanying the mini-troopers said “I was really impressed with how JT addressed the rest of the group in congratulating them on their efforts after they completed the bleep test. It took me by surprise.”

Throughout the core programme, there will be plenty of time for your mini trooper to work on their fitness as we include lots of activities that involve exercise. You can get involved at home too, turn this into a healthy competition, perhaps set out your own scoreboards and get the whole family fit.

JM said “It was my new years resolution to improve my fitness, I will practice my sit-ups because I really want to make it into the 300 Club.”

JA said “I was born 10 minutes after my twin MA and she is dead bossy. I want to beat her in the fitness assessment today.” This comment really made me laugh as we have already noticed a degree of competition between these two. JA did beat her sister by 10 points scoring 300! 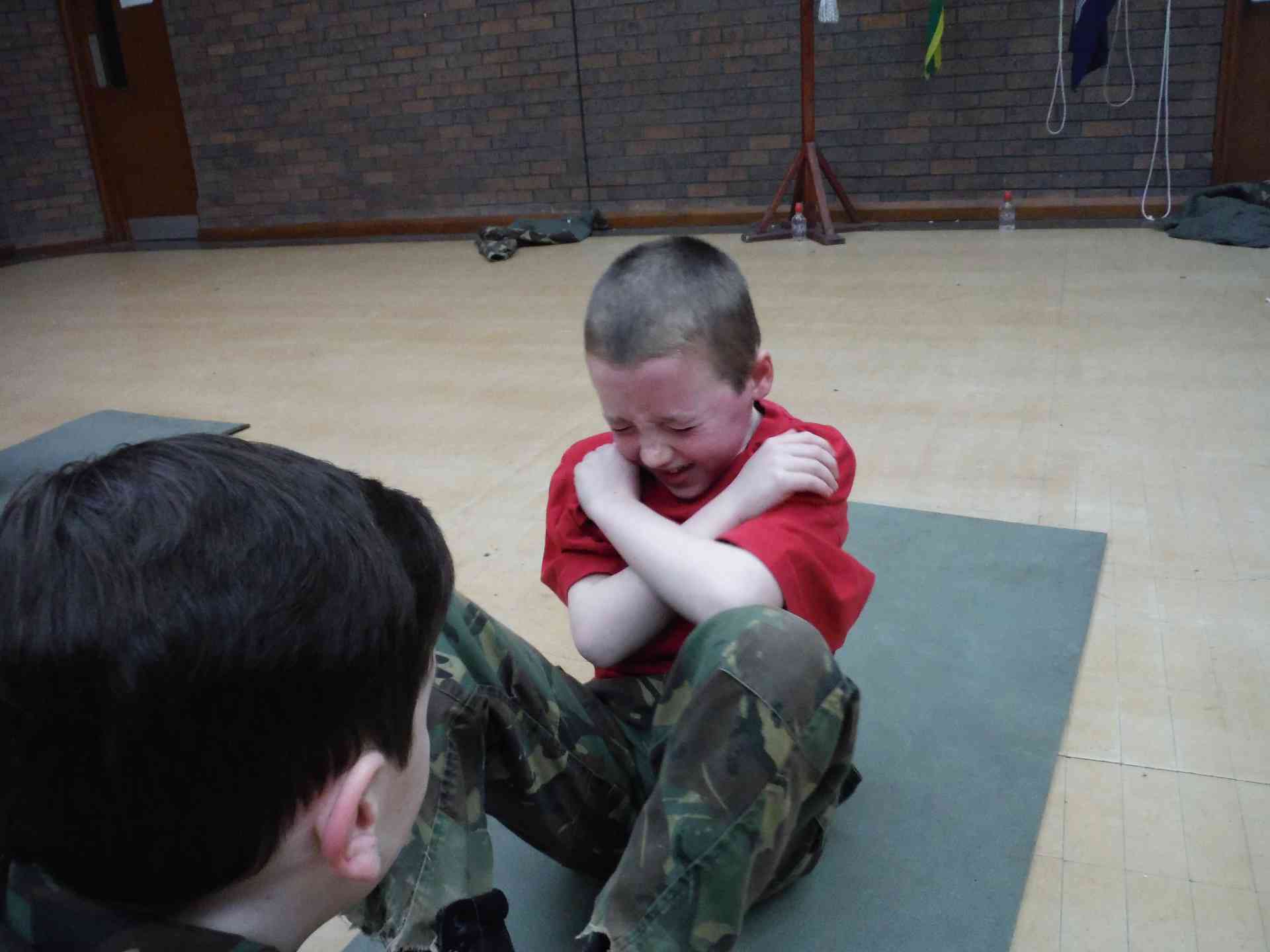 Building a better you.

Throughout the course, we will be building your child’s ability to work as part of a team, setting out tasks that will challenge them in a number of areas such as problem solving, communication, working with others and their leadership skills. Today, we introduced the first of many such tasks to the mini troopers

When tackling the tasks, there is no right or wrong way. They need work together to explore ways of achieving the task, agree on a plan of action, assign roles to one another and then undertake the task. We are looking at their behaviour and approach to the challenge, always encouraging them to communicate, problem solve, listen to each other, trying and failing and having the courage to try again.

This is a time when we identify natural leaders, those who are more likely to shy away at the back in fear of sounding silly in front of their peers, those who are confident in speaking out and those who can take instruction as well as those who dive straight in with no thought.

The teacher was particularly impressed by one particular participant commenting “I can’t believe you got CG to not only speak up but to give orders, that is astounding when she is normally so quiet”.

At the end of the challenge, it’s a time for us as a group to evaluate the task; to listen to them relay their own experiences, discuss what worked well, what roles were played by each individual, consider if everyone was comfortable with their role, what could have been done better and consider how well they communicated as a team?

Now I have seen how they have performed and identified their strengths and weaknesses, I am able to make a mental note of who needs to develop which skill, and use this as a platform in moving forward over the next 10 weeks.

I’ve really enjoyed Discovery Week. As their instructor, it’s the first chance I get to really see the individual personalities and characters and see that determination and grit for the first time. The energy levels were high today and the mini troopers were really pushed beyond limits they never knew they had.

Join us next week to discover how we took to the woods and learned how to “not be seen” in a camouflage & concealment lesson during Field Craft Week. Read Week 3’s blog here