After 12 weeks, the mini troopers put on their uniform for the very last time. After checking each other to make sure all their pockets were all closed, collars were turned, boots cleaned and t-shirts were tucked in, they stood in front of us. They were slightly nervous, as they listened in as we went over the activities and drill for the evening, explaining to them that this was their moment – their time to stand proud, and to stand tall because each and every one of them had cause to celebrate.

After parading into the school hall, showcasing their drill skills in front of parents, teachers, pupils, including their classmates, they sat at the front, in pride of place. We started the awards presentation by explaining to all those present, the 12-week journey the mini troopers had been on and how we had twelve transformed young people sitting in front of us.

We reiterated the personal challenges which the pupils had set themselves at the outset and how these had been overcome. The twins who sat side by side, had both conquered their individual challenges; MA felt she was too bossy and JA who wanted to sit still and get better at following instructions, both had made significant improvements over the course. SN and HB both started off being ‘glued to the hip’ now sat confidently on separate rows with their new found friends surrounding them. CG looked out at her parents smiling proudly and no longer hiding at the back. JT and MM waited nervously to find out if they had done enough to make it into the 300 Club. JM and DM who were never ones to be the centre of attention, sat proudly looking more confident, while CF and KDA just wanted to relive the 12 weeks through the slideshow of photos we had promised to show them.

Looking back – moving and funny moments

We did not keep them waiting…everyone watched as we put on the slide show showing their journey. There were laughs and tears, as they were reminded of just what they had achieved and how far each of them had come. They were reminded of week one where they learnt how to correctly iron their uniforms and their showed their drill progress and fitness assessments on Discovery week. We looked back at field craft week, bush craft week and the adventure training day along with the results of all the hard work they put in on conservation week at Delamere Forest. It was at this point we were able to point out to the mini troopers and the parents that completing the course was a massive achievement in itself and that everyone was going to receive a completion certificate.

In addition to this, we had the 300 Club awards to give out and I’m pleased to say that we had amazing results from the assessments undertaken on Week 11, which showed that everyone had improved dramatically. Tonight we had 4 awards to give out; our first of the 4, went to MM who throughout the course was always in competition with himself to be better and always managing to encourage and motivate others along the way. The second one was awarded to JA who impressed us with reaching the 300 Club on his first assessment and yet still managed to improve his score on his second attempt. His twin sister MA also made it into the 300 Club. Hugging each other with a moment of congratulations, they both stood equals. Lastly but by no means least, the last of our 300 club members JT who impressed us on his assessment, he was the last man standing. Even when he got to Level 10 of 14 ,he knew he had made it but he carried on to the point where he was pushing to the very last breath. Running a very impressive level 14, he did not quit once, he pushed through to the end. It was a well-deserved achievement. 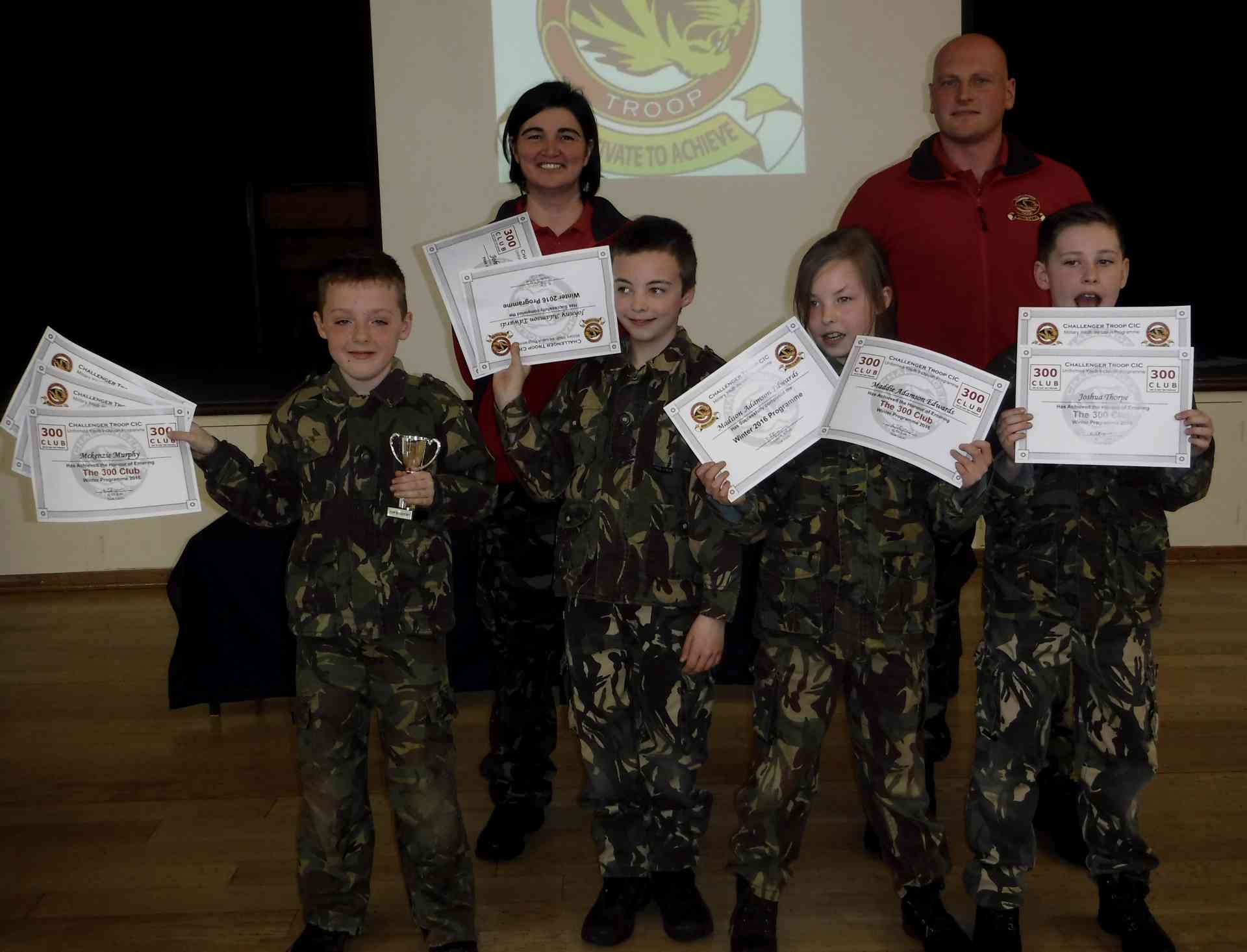 Now it was time to turn our attention to the three main awards, which are for the Most Improved, the Best Endeavour and the Top Student. As a team of instructors, deciding who merits these awards is a long, thought out process especially on this programme, as all the mini troopers had showed courage, grit and determination throughout the 12 weeks.

However, for the Most Improved award, one mini trooper stood out for us. This award recognises the amount of progress this mini trooper had made over the 12 weeks. On week one, we met a girl who was very shy, who struggled with simple tasks, yet despite this she never gave up, always pushing herself mentally and physically with an unwavering desire to improve. Never letting the fact that her co-ordination wasn’t the best, stop her in any task, she would continue to push on and this showed in her 300 Club results as she had the highest improvement score of the whole group. In addition, she started the course with one very good friend, and as the course went on their friendship grew from strength to strength, but so did her friendship with the other mini troopers leaving her with a wider circle of friends. We were so honoured to award SN with Most Improved award.

Moving onto the Best Endeavour award. We presented this to the mini trooper who throughout the course gave 100%, never complained about anything and just took everything in her stride. A remarkable young girl who is often faced with tough times and challenges beyond her years, but each week would give it her all and manage to do so wearing a smile. This award was well deserved for HB. One would go far to meet a child as kind as she is.

Finally the award for the Top Student, all the mini troopers had achieved so much during this programme but we were looking for the one who comes each week ready for the day’s tasks, always wearing the correct uniform, has that can-do attitude, gives 100% and who is the mini trooper who always offers to help where they can. I am proud to say that we had one such mini trooper. He participated each week giving 100% effort, always wanting to help out and he was always willing to help others including the Sgts rather than being the first to get things done. He had excellent manners and was never in competition with anyone but concentrated in bettering himself. He stood out for us on a number of occasions and excelled in the residential. We were PROUD to award MM with Top Student. 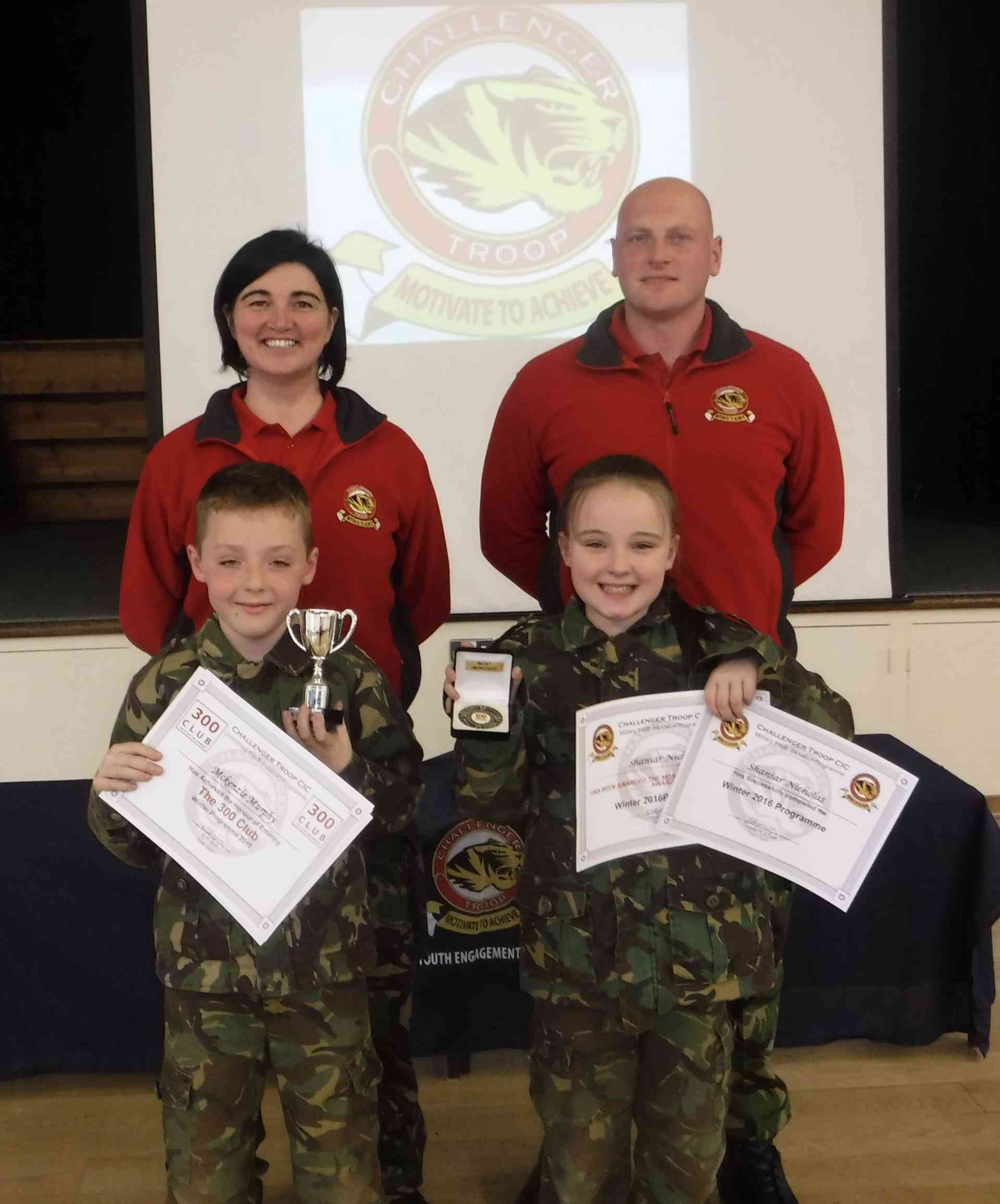 The impact on their teacher

As the presentations came to an end, one of their teachers stood up and talked about how he had worked with Challenger Troop since 2012 and how it amazes him each time when it comes to the awards ceremony. “As a teacher, when it comes to guessing top student, I always get it wrong.” He went on to explain that in a classroom environment, there is a pupil who could be the obvious choice but the beauty of Challenger Troop is that it’s his least expecting choice who gets Top Student. He went on to explain how as a teacher he doesn’t really know his pupils, of course he can say academically he knows their strengths but does he really know them as they are different outside the classroom environment. He shared a story about how he had a class of pupils and it was only when taking them on a 15 minute walk to the swimming baths once a week that he really got to know his pupils, learned who they were and he said that’s a result of them being relaxed and out of the learning environment. He saw how they would open up and as their teacher we got to know them as individual people not pupils. He added that Challenger Troop had opened his eyes to the pupils who don’t always shine in the classroom, the ones who might not always put up their hand to answer a question even though they know the answer or to lead in an activity even though they desperately want to. He concluded by saying that he believes that being on the Challenger Troop programme, changing the way we learn and coming out of the classroom is all some of the pupils need.

Listening to him speak, I was reminded of my own personal feelings – the intense feeling of creative freedom I still get from being outside in the natural environment, and I used to get as a child when I was away from the pressures of the classroom, playing outside or riding my bike. For me this is a source of constant inspiration and one which I hope to share with those I work with.

I have thoroughly enjoyed working with this group of pupils from Palace Fields and I really hope you have enjoyed following their achievements. Over the last 12 weeks, we have watched them overcome their fears and have challenge both their minds and bodies and achieve things they never thought they could. They continually demonstrated determination, grit and a willingness to push through their limits. It’s been a great honour to be the one to take you through each week their progression. Thank you all for following: Have a look at the video below…

If you would like more information on how our programmes, support young people, please call us now 0845 548 5070 or click HERE