We pulled up to Palace Fields school gates at 3:30pm on Tuesday to be faced with 15 mini-troopers, all standing tall and eagerly waiting to climb aboard our mini-bus and set off on their residential adventure, along with teachers Mrs Huff and Mr Beech. We loaded up; judging by the size of some of their suitcases, you would have thought they were going away for a week rather than just the one night. After a short trip, we arrived at our residential camp location where we were greeted by Sgt Bussell, who took us through First Parade before giving a briefing on the forthcoming activities. After issuing the warm kit – hats, gloves, and waterproofs, followed by their backpacks, which included a mug and water bottle, we set them off on a short run around the grounds of the camp to ensure they were nicely warmed up.

Over the next 12 hours, the mini-troopers would be put through a series of activities and observed on their skills. We also set a scenario; we informed them that there was an ‘enemy’ out on the ground who would be trying to get information from us, the codes needed to release the laser-tag equipment. We underlined the importance of their ability to demonstrate the skills they had learnt over the past 8 weeks to ensure we did not give away our location, also to keep our eyes and ears to the ground as we would also need to obtain the enemy’s code to be able to successfully unlock the laser equipment.

Before all that however, setting up camp…

After the warm-up exercise, we paired off the mini-troopers with their new bunk-mates. Working in pairs, they collected a tent and their beds, along with sleeping bags and roll mats. After which, they worked hard to get their tents up and pegged in before making their beds. The air was filled with excited voices as they gave instructions to each other on what needed to be done. Everyone worked tirelessly to get the tents pitched. Those who finished first went off to help the others, demonstrating great teamwork from the outset.

“I’m in a tent with my two best friends and I’m sleeping in the middle, so I’m the warmest” said KA

“Can spiders get in?” asked BPA “I don’t want them eating my rations.”

HB was excited to set up her bed and went on to tell us how comfortable it was.

An enemy? Nobody said anything about an enemy…

With camp set up, we divided the mini-troopers into two teams and explained how they would be using their newly-learnt skills to navigate their way around four locations to collect their rations. After giving the teams a map, we watched as they each planned their route and chose a leader to take the first leg. We reminded them about the different ways we could communicate to ensure we did not reveal our location to the ‘enemy’. (The enemy, I should mention at this point, is actually played by Sgt Ellison). The mini-troopers gathered the information needed and relayed it back to myself and Sgt Bussell before setting off. They walked in complete silence and in single-file, using only hand-signals to communicate. They did impressively well in keeping so quiet and looking out for possible sightings of the ‘enemy’. Everyone took a turn to lead and for those who were struggling to orienteer the map, there was always someone ready to help. They managed to get round all four locations and collect all their rations. 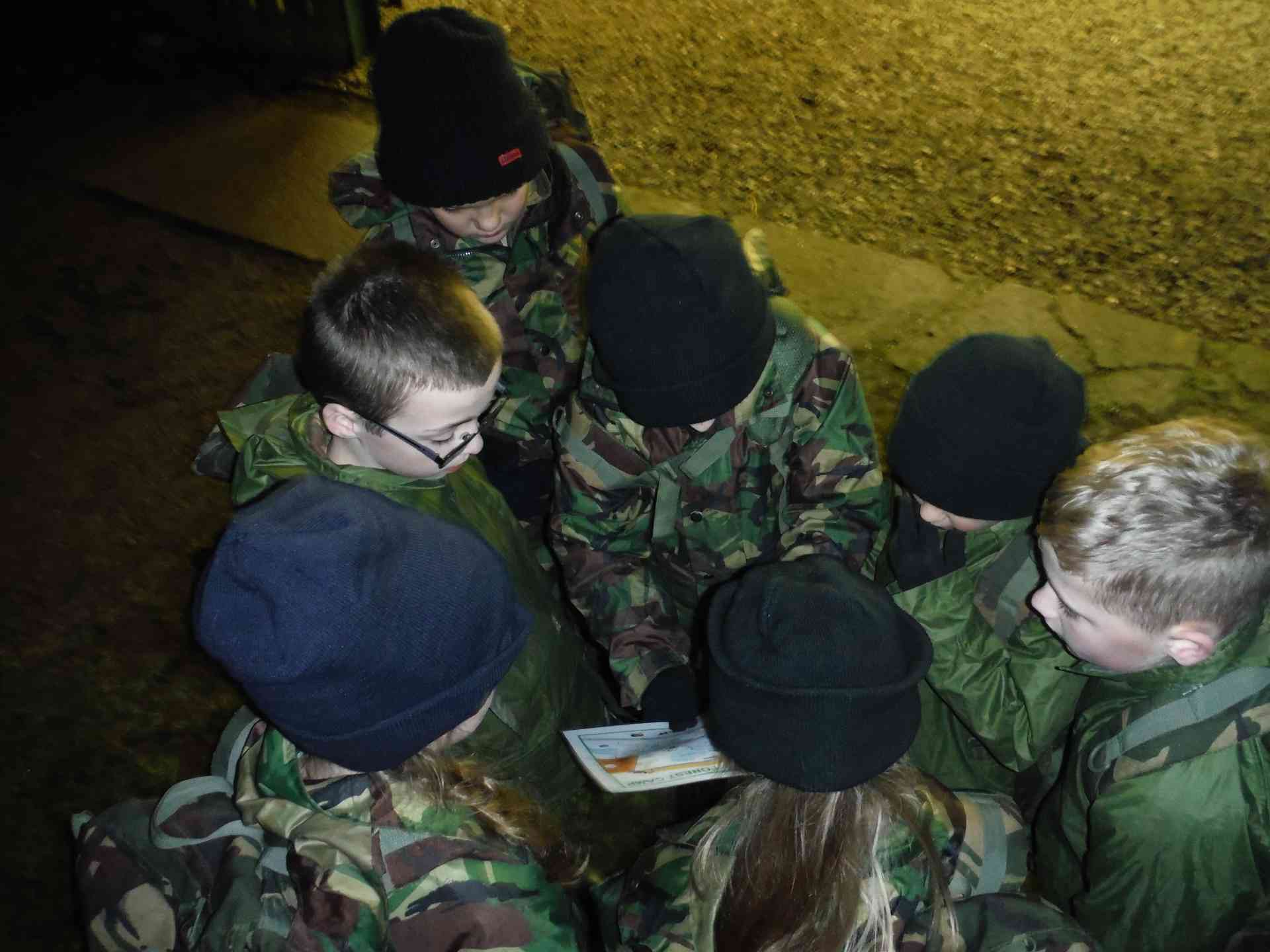 “JM really stood out on that task, getting stuck in and helping the group out” said Sgt Bussell.

Spotting what we thought was the ‘enemy’, we gathered intelligence. At the end of the navigation task, we sat down and discussed what we had seen; how many enemies had been spotted? What they were doing? And what their mood was like?

KA spotted six enemies and said they spoke in funny accents! JT said “I saw three and I got down and laid on the ground till they all passed.”

With all the mini-troopers back at camp, we settled down to prepare for dinner, which they were going to heat themselves. They enjoyed a warm drink and had some well-deserved down time in which to enjoy their meals. 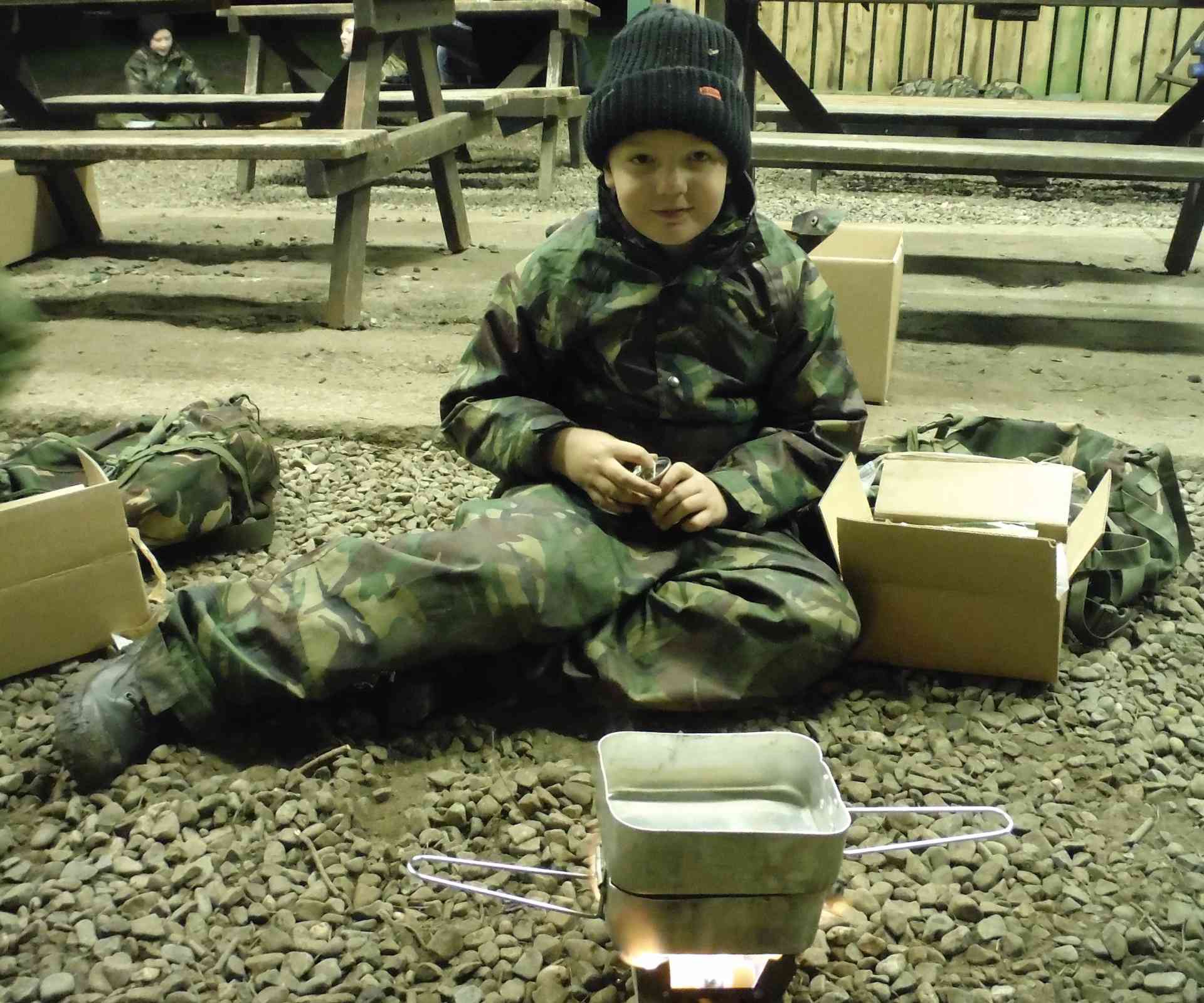 Re-energised and with a belly full of food, we all headed out for the evening’s activity, which was a CTR (Close Target Reconnaissance). We briefed the mini-troopers on how our mission would be to gather information from the enemy. Putting all our skills into practice, we would be sneaking up on the enemy, listening and observing in order to try and obtain the code for the laser-tags. This would not be easy for some as it was now dark and late, meaning some mini-troopers had to overcome their fear of the dark and place their trust in their teammates and instructors.

“Everything is so scary in the dark, I couldn’t see anything in front of me and I had to hold MA’s hand,” said CG

“I forced myself to open my eyes after we stopped to see the enemy base because I wanted to get the code for the laser, but it was really scary,” said MM

We located the enemy camp; the mini-troopers laid out in a half circle, watching and listening in as the enemy gave out a code. At one point I looked over at half of the group, who had their eyes squeezed shut. Others were laying on the floor and being deliberately unresponsive to my calling them in fear that it was an enemy trick. They really impressed us with their concentration and their determination to overcome any personal fear in order to get that code.

Just who was the enemy? And did they get the code?

Once we had the code, the mini-troopers guided us back to base, again using only hand-signals. Upon our return, we held a debrief in which they were able to tell us the information they had gathered. Personally, I think Sgt Ellison should become an actor, as he clearly had the children convinced there was more than just him out there tonight, and they were sure he was 7ft tall and spoke several languages! The information they gather never fails to make me laugh. They did, however, manage to relay the correct code to us, so telling them what a success the evening had been, we asked them to change into their evening warm kit and get ready for bed, as the next day would be a full-on, fun morning, with laser-tags to look forward to. Everyone settled in their tents, we listened to the sound of silence. Not even five minutes had passed before they were all out for the count. 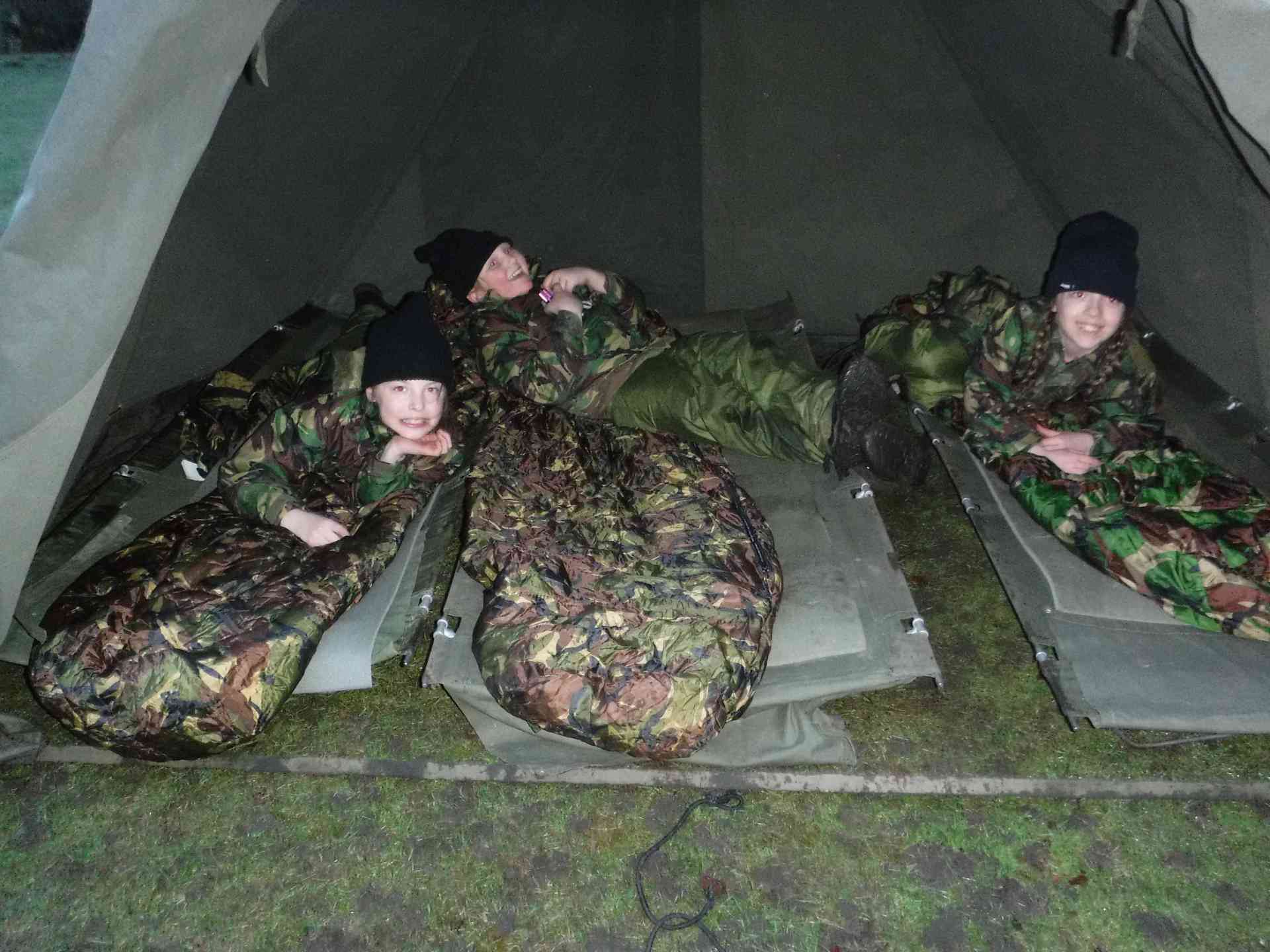 Morning soon arrived and we had the mini-troopers up at 7am, tasking them with getting washed and changed into their uniforms before settling down to breakfast. We heard all about the wild dreams they had had, along with comments about how they had heard the Sgts take down the enemy, which made us chuckle as little did they know that we were also out cold not five minutes after hearing their first snores. Breakfast eaten, it was time to take down basecamp. Working as a group, they went off to clean away all dishes and pack away the kit. JA and MA were both quick to volunteer to do the washing-up as it’s their chosen chore at home, so, accompanied by KA, off they went off to crack on. The rest of the group really got stuck into taking down the camp and packing away the equipment before heading out to enjoy the laser-tags – we will let your children describe to you what happened next as the laser-tag battles are a closely guarded secret known only to those who have been on a Challenger Troop residential! 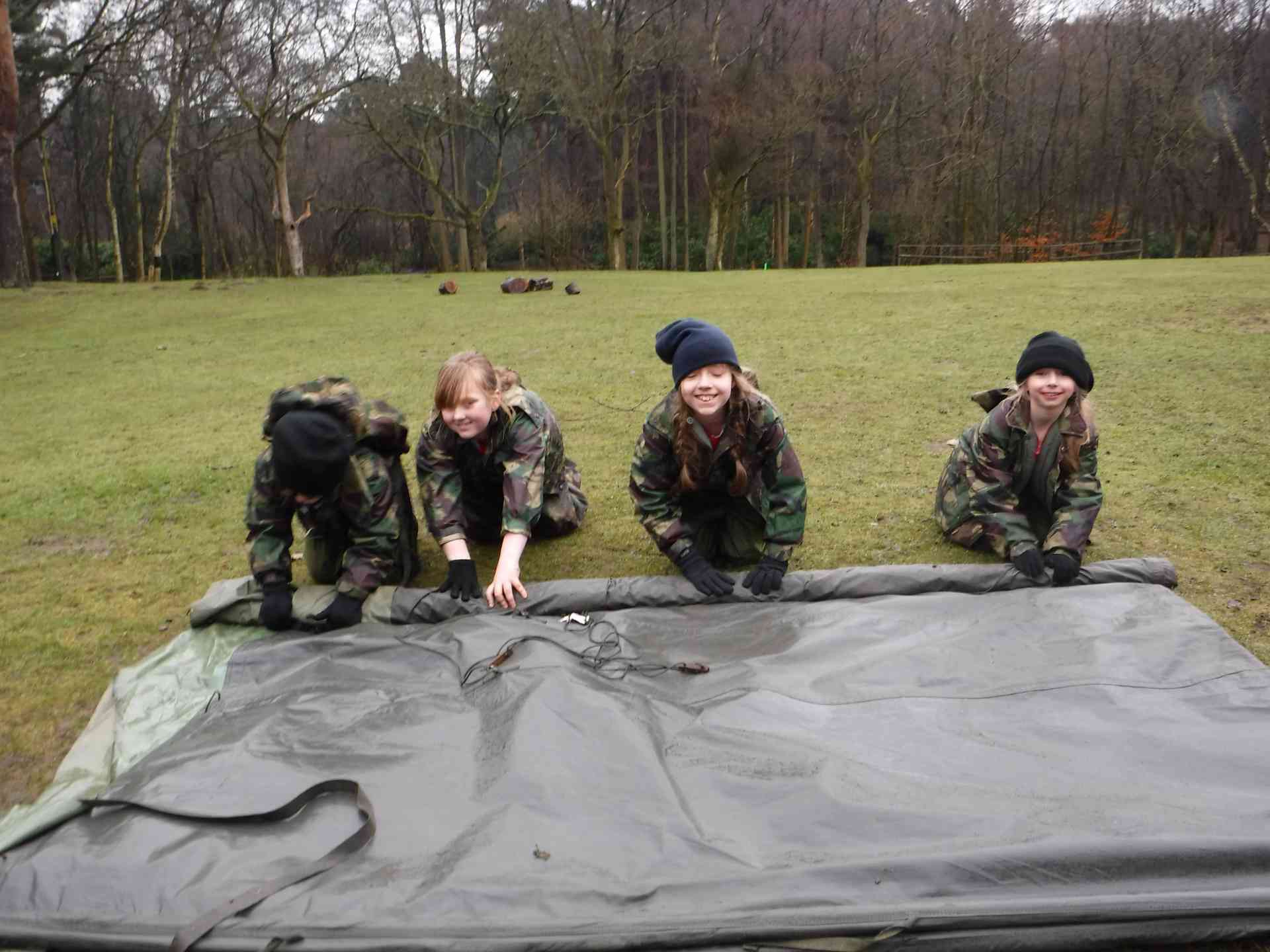 Over the duration of the course the mini-troopers really impressed both the teachers and the Sgts with their enthusiasm, their determination, their grit and their ability to work as a team for the whole time.

The difference a residential can make…

I’d like to end on a story about pushing through personal fears and demonstrating inner courage. As the evening was coming to a close we had one mini-trooper in tears, feeling homesick, fearful of the dark and not wanting to stay. With a talk from the instructors and teachers, we assured him how safe he was and that by the end of the session tomorrow he would feel that it had all been worth it. Hesitant to join in the evening’s activities, he decided he would push through his fear of the dark and, staying at the Sgts side, he found the courage to carry on with the activities. With just a few more tears before bed and more encouraging words from us and his teammates, we convinced him to stay and he settled down. When morning came, we saw a different child standing before us, he was confident, he was enjoying his breakfast rations and when it came to putting on his battle storm laser gear there was a smile that was so big it covered his whole face. I looked across at the teacher, who was also taking in what we were seeing – a confident happy little mini-trooper who had pushed through his fears and was rewarded with a tremendous sense of personal pride and achievement.

“I thought I’d be taking him home last night, but seeing the difference in him today I’m glad we didn’t. That smile! I wish we had captured that on camera,” said the teacher, “It was a great experience and to see how all the pupils got stuck in and showed us their determination and grit has been really impressive.”

Next week is all about giving something back to the community as we take on Conservation Week. I look forward to writing to you all again.

If you would like more information on how our programmes, support young people, please call us now 0845 548 5070 or click HERE